Both of these words, in this form, are Stative Verbs, which describe very similar states.  In fact, if you look them up in various dictionaries, you will probably find that each word is defined with the other.  However, this is not actually correct.

First and foremost, the word “Concern” is a Noun, which refers to some “thing” which is important to someone, or somehow has a great deal of influence or affect on that person.  This is why, when people have large amounts of money invested in different businesses, projects, etc. they are referred to as “Concerns”.  If those investments should fail, the outcome could be very detrimental to that person.  And this is the source of the mistake.  A person can be concerned about his or her investments.  But that doesn’t mean that that person is “Worried”.
.

However, the word “Worry” is a Verb which refers to the act of troubling one’s self and one’s mind with anxious thoughts about the worst possible outcome of any situation in-which that person feels that he or she does not have any control.  And therefore, only causes detriment to him or her self, without helping the situation in any way.

To be “Concerned” about something, is a natural state of caring whether something of great importance will go well or not.  But knowing that to cause one’s self to be anxious or troubled (to be “worried”) is not in any way beneficial — then, to be “Concerned” is definitely NOT the same as to be “Worried”.

And To It Put Another Way…

To be “Concerned”, is to be:  Mature;  Calm; “Level-Headed”, and Relaxed about some situation – regardless of the pressure that it may put one under.  (Think NASA Mission Control) 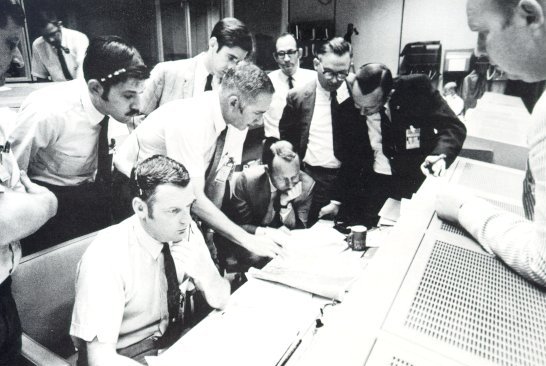 And to be “Worried”, even when it is a very serious situation, is a way of giving up one’s composure and rational mind by assuming the worst…  Even when there is no clear indication that that worst-case scenario will actually manifest itself.  (…something like this…)

You can find more similar words that are commonly mistaken on the “This” vs “That” Page of The GiveMeSomeEnglish!!! – Lexis Portal