.
“The Best Revenge Is Living Well”
. 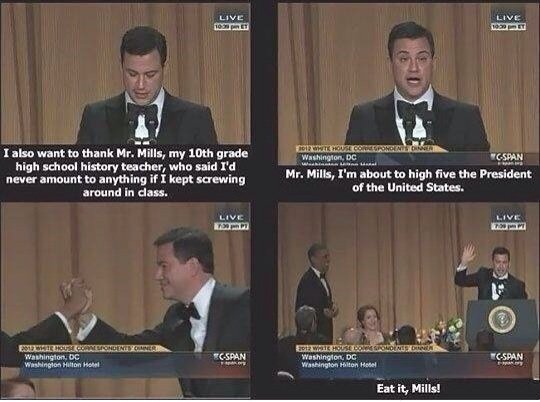 My use of this picture is IN NO WAY an indication of my support for either this former so-called “comedian” or that the other person who can’t even do a proper “high-five”… it’s just a funny example of this phrase…  (if it was true)
This “Closet Classic” is a resurrection from one of the earliest of the “Tid-Bits” categories (which fell into obscurity for so very long).  It also falls in the classifications of both Aphorisms and Sayings on the Lexis Portal of GiveMeSomeEnglish!!!…

So here it is!

.
“The Best Revenge Is Living Well”
.

This is a saying and aphorism which we use to express that – rather than listening to the people who do not believe in you, or who treat you poorly…  or who somehow cause you distress – It’s better to “move on”, to work on improving your own life, and to NOT listen to or pay attention to them.
. Because, ultimately, if you do-so…  you will probably end up in a better place than them anyway…  But if you DO listen to them, and let them “get you down”, you will probably prove them all right.

Yolandi Can Tell You How To Deal With The Haters

This saying is also used as advice to those who have been hurt by people, such as those explained above.  People who may feel like they want to do something…  as revenge…  to hurt them back, like they themselves were hurt.  But this advice is used to remind them, that doing something to get revenge on those people who have hurt them, will never have the desired affect, and the revenge will not be nearly as helpful as simply making themselves better.

Imagine that you are the person who was hurt, and wanted to get revenge on the one who hurt you…  Well, then the actual “revenge” part comes when you – the one who decided, instead, to “live well” – may see that other person again, later in life…  and that person then sees just how well you are doing…  and then they feel like shit for ever doubting you, saying bad things about you, and/or doing bad things to you…  And that feeling comes not from you…  but from their own actions, thoughts, or words that they used against you…  which have finally “come home” to do the same thing to them.

When they are irresistibly drawn to you (because of your magnetic presence from “living so well”), and then tell you how great you look, and how amazing you are…  you can simply say “thanks” and move on, leaving them behind , and finally being completely free of any of the hurt and/or harm that they ever did to you. 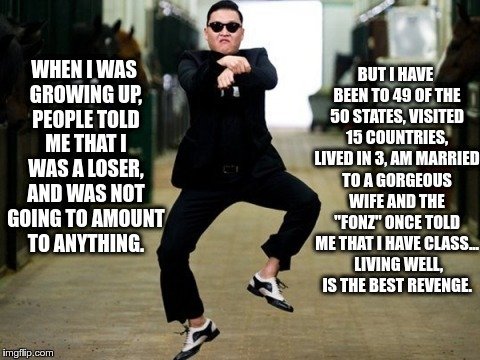 And all those other people are now fat, bored & frustrated – and look about 20 years older than they should for their age 😀

(And The Rest Of Your Life Too)