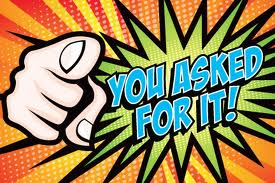 This is a fairly common phrase which you may have heard in movies or on television.  This phrase is used, quite often, when someone is about to get punched in the face (or suffer some sort of “negative” situation.)  The other person (who might not really WANT to punch the first guy – but who has a sinking feeling that it is to happen anyway) might say…

…Or maybe this person actually DID punch the other one – and then, looking down on the fallen victim, might say…

“(To) Ask for it” is an Idiomatic Phrasal-Verb which is used to say that some person has caused (“asked for”) whatever condition he or she is now experiencing (“it”) as a result of his or her previous or current actions.

Basically, it is a way of saying to the other person (before-hand)…

“You, by your behavior, are very-much provoking me – and if you do not stop – you are going to experience a very un-pleasant situation, which will not be MY fault (even if it is me who causes you harm.)  The blame, instead, will lie completely with YOU for having pushed me to the point of un-willingly causing you physical pain or somehow helping to create a situation that will be quite un-pleasant for you….  Essentially, you are behaving in a way that is ASKING FOR punishment.”

This phrase, when used before-hand, is essentially a warning to the other person to STOP whatever it is that he or she is doing, or that he or she may suffer the consequences of his or her actions.
. If used after-the-fact, it serves as a way for the person who served the punishment to relinquish any responsibility or guilt for the situation (whether true or not) as the person Asking For It provoked the situation, and may not have deserved a warning (like in the image above.)

“(To) Ask for it” can be used with any Impersonal or Personal Pronoun (He, She, It, They, We, You, Bob, Susan, etc.) and can be used in almost any Verb-Tense – but is, usually, only used in the Present Continuous or the Past Simple Verb-Tense.

Past Simple:  “Well, the little punk was asking for it by messing with someone three times his size.”

Present Continuous:  “That little punk is asking for it!  He’s going to get the sh!t kicked out of him if he doesn’t knock it off.”

You may also find this phrase in American TV commercials.  In these cases, it is usually meant in a good way.  For example if a company has a product that they discontinue, and then the customers literally ask for it, or if the company comes up with a NEW product based on customers needs, then the phrase could be used in the commercials like:

(In this case, the meaning can actually be literal or at least only partially Idiomatic)

P.S.  This phrase does not always have to do with getting punched in the face…  I just couldn’t find any GIFs about getting divorced or being fired from one’s job 😀